It’s true – I’m reformed. I no longer point and laugh at grammatical errors and here’s why.

In the internet age, English has taken on some strange and wonderful new forms. Character limits and awkward numeric keypads practically forced the English language to change. With everything from acronyms and gifs to using emojis to replace entire sentences.

Imagine trying to explain this sentence to your great-grandparents:

Writing online requires you to write in a way that conveys emotion, or comes across as more speech-like. Which often means breaking the rules of grammar and punctuation. And breaking those rules deliberately.

But is this really all that bad? Not being able to communicate face to face with people means we have to rely on text (or emojis, gifs or punctuation) to convey tone of voice. So now typing in all caps conveys anger, and using a point can convey passive-aggression. And using an eggplant emoji conveys much more than an ingredient for Moussaka. The playful repurposing of standard punctuation and addition of emoji allows us to infuse our writing with extra meaning. Just like we’d use facial expressions during a conversation.

So the new way to write online isn’t lazy, it’s creative. We’ve repurposed old school elements in a creative way to convey tone or emotion. That’s smart – not stupid. And it’s elevating language – not dumbing it down.

I love the fact that the English language is an ever-evolving, living thing. We’re constantly finding new and better ways to communicate with each other. Don’t you find that exciting? 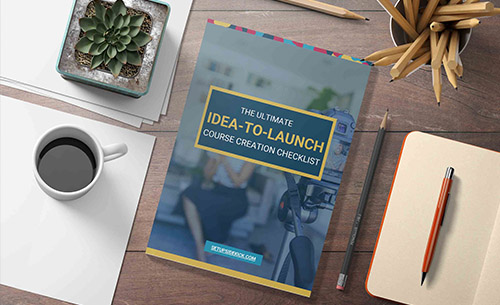 Every step you need to take to move your course from idea-launch.

Thanks, the ﻿checklist is on its way to you! Check your email & If you don't see it in your inbox, check your promotions or spam folder in case it's there.